Majolica Madness: Why It’s the “It” Collectible Right Now

In a recent article, Veranda magazine likened “wild and wonderful” majolica as a “fantastical ride down a Victorian rabbit hole.” I loved that description because to me, the art form that has roots in the Renaissance, rose to popularity during the Victorian era, and is now riding a wave once again as a must-have among collectors, is certainly wild, absolutely wonderful and most definitely fantastical.

Today I’d like to share with you a little bit about this somewhat polarizing art (you either love it or….not) and why it is quickly securing its place once again as a design darling.

First, let me clarify that when I speak of majolica, I’m talking about the real thing… in all its colorful, fantastical fabulousness. There are plenty of “new” majolica-inspired pieces out there today that are awesome and definitely more affordable, but today, I’d like to explore the real deal collectibles.

The earliest examples of majolica appeared in the 1400s during the Italian Renaissance. The art form was introduced into Italy from Moorish Spain by way of the island of Majorca (hence the name) and bore religious, mythological themes. Majolica as we know it originated in London at the Great Exhibition in 1851 with themes that represented the scientific and social advances of the era, as well as exotic creatures, both real and imagined, fruits, flowers, fowl and game instead of religious themes. It was widely used by the English upper and middle-classes, and the popular pottery eventually found itself in production houses worldwide. It seems like every country had their own version.

The popularity of majolica ebbed around the year 1900 in favor of the romanticism of the Art Nouveau movement but by the 1970s, majolica experienced a surge and gained momentum among collectors.

Okay, enough of the history lesson. Here’s why I love majolica….it’s so freaking cool! It’s colorful (love). It’s imaginative (always a plus with me). It’s unexpected (yep), and it looks good in pretty much any style of home (it’s true). So, it’s a little pricey. Yeah, but so are most things worth collecting.

Definitely gorgeous, these decorative plates would be so beautiful displayed in any home.

DID YOU KNOW? True antique majolica pieces generally bear the maker’s signature mark, whereas modern replicas most often do not. The glazes used on newer pieces are also brighter and fresher and can be prone to dripping and sloppy application. Artists from the 19th-century worked with greater precision and skill.

The Victorian era saw a rise in the interest in oyster consumption and oyster plate production. Through the 19th-century, oysters seemed to be available everywhere–in restaurants, on street corners, at oyster parties, etc. While oysters were first a working man’s staple, over time heads of state, monarchs, and the social elite enjoyed oysters and ordered china dinnerware sets featuring organically-shaped oyster plates. (Source: Dr. Lori)

FUN FACT: Victorian oyster plates were popular wedding and anniversary collectibles because of the oyster’s well documented history as an aphrodisiac.

New York antiques dealer, Linda Horn, told Introspective magazine that “People want colorful, fanciful pieces for juxtaposition in their modern or minimal environments.” Pieces like these pitchers and vases are not only magical but useful, as well.

DID YOU KNOW? Many potters are making majolica today, but collectors covet early pieces. As with most popular antiques, the cost of a piece of old majolica is much higher than its original price. Pieces may cost anywhere from $35 for a small plate to thousands of dollars for a set of dishes.

This glorious white majolica vase is valued at $6000!

(left): How cool is this majolica stork umbrella stand? Now that’s a use for majolica that I bet you never imagined!

(right): This absolutely gorgeous centerpiece would certainly dress up any dining room table.

This rather creepy looking majolica stork is actually an absinthe jug.

For those of you who don’t know, absinthe was an alcoholic drink made from the bitter herb Artemisia absinthium, commonly known as  wormwood. It became popular in France in the 1800s, especially among artists and writers. It had a reputation for making people a little wild and at the time was thought to cause convulsions and foaming at the mouth.

This stork looks like he soaked in a little too much absinthe over the years!

JUST FOR THE “PRETTY” OF IT

These two majolica figurines serve no purpose but to just look amazing. And they definitely do. The 5-ft peacock is spectacular, isn’t it?

EVERYTHING BUT THE KITCHEN SINK

There are so many fabulous pieces of antique majolica that I want to show you, but unfortunately, this post has to eventually come to an end. Before we wrap this one up, though, I’d like to share with you just a few more wonderful, magical, fantastical pieces that I discovered when researching this blog. I hope you enjoy them as much as I do.

How sweet is this little teapot with the monkey’s tail as the handle?

This intricate mushroom game pie dish takes us into the woods. So beautiful.

FUN FACT: A game pie is a savory pastry dish containing any of a variety of game meats. Meat pies were consumed by the aristocracy of the Roman Empire and included wild birds and other animals.

During the Victorian Era, majolica game pie dishes became more popular. The pie was baked in the ovenproof liner and delivered to the table in an elaborate, brilliantly glazed covered majolica dish. (Source: Majolica Society)

Green majolica is quite popular. This mouse cheese tray is so pretty and whimsical.

(right): There are probably more majolica designs for jardinières and cachepots than any other majolica form. Majolica was ideal for use in solariums and greenhouses.  (Source: Etruscan Majolica)

Majolica collectors tend to be those who favor the more is more approach to design. They are maximalists at heart. How cool would it be to have an entire display cabinet or hutch like this entirely devoted to a majolica collection? (For more on maximalism, click here).

So are you a heck yeah or a maybe not when it comes to majolica? I’m definitely a heck yeah, and it seems like many people find themselves on this side of the majolica fence lately. Who knows why fads come and go and why trends ebb and flow. But for this happy, whimsical pottery, maybe it’s because we are taking ourselves a little less seriously these days. Maybe it’s because we are looking for the joie de vivre in our lives.

If you need help working a little majolica into your life, we’d love to help you find a few pieces and start your collection. And remember, if you need help with a remodel or new home design, give us a call at 314.395.1114 or CLICK HERE to contact us.

By the way, we’re back running full speed at Marcia Moore Design, but if you still prefer to work virtually, we understand and can do that, too. Whatever works best for you and makes you the most comfortable is great with us.

P.S. If you just can’t get enough of majolica, check out our Pinterest page here!

NEW OFFICE LOCATION COMING SOON IN BRENTWOOD MISSOURI
Until then we are working from our homes so please email or call to reach us.

We can't wait to hear from you! 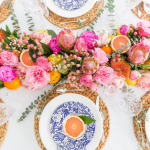